Treece sworn in as Commissioner

On January 8, Treece was sworn in alongside the other new Board Members: Chair Kathryn Harrington and District 4 Commissioner Jerry Willey. 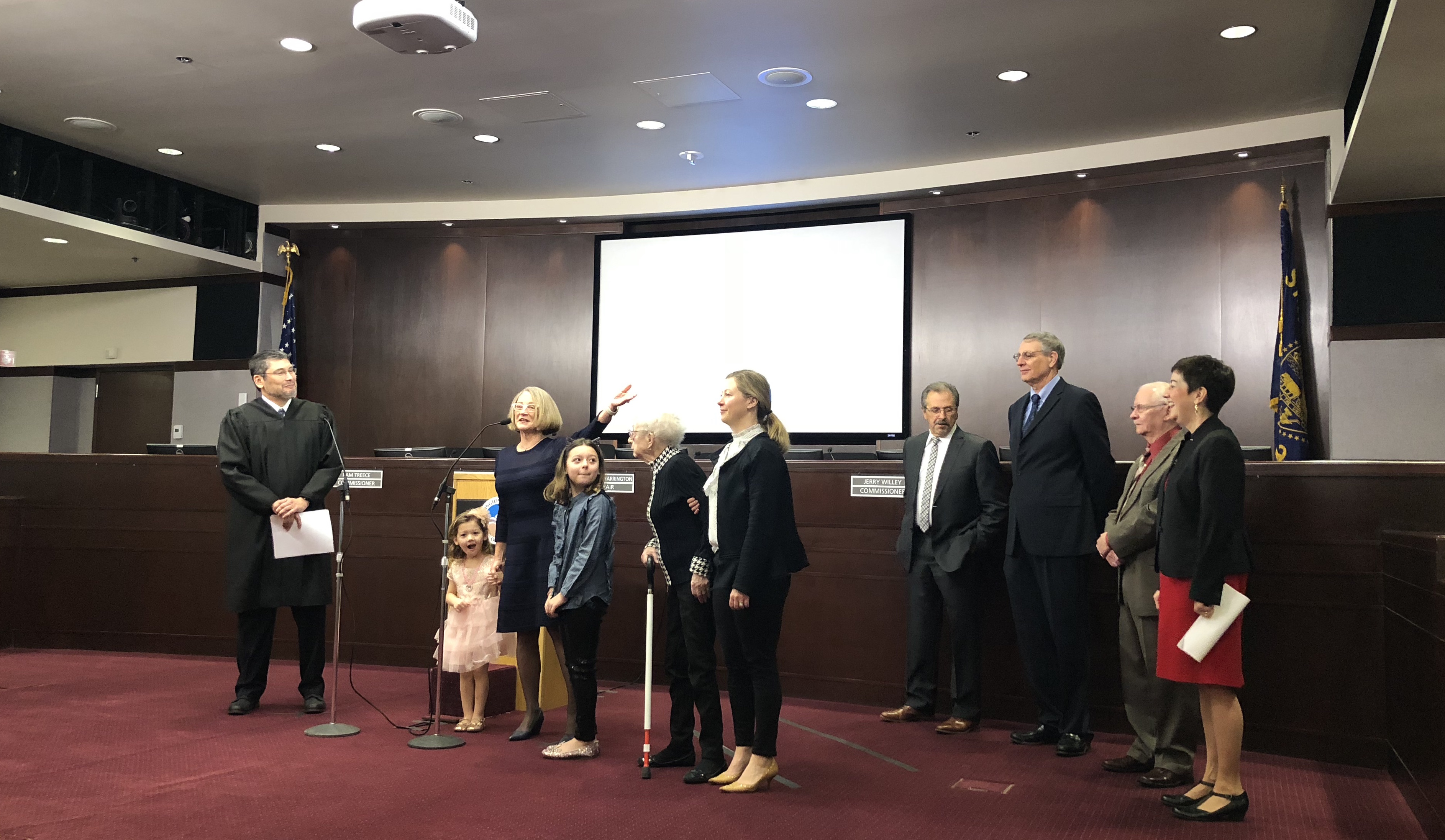 As if to underscore that point, Judge Oscar Garcia of Washington County Circuit Court administered the oaths to Board Chairwoman Kathryn Harrington of Beaverton and Commissioners Pam Treece of Beaverton and Jerry Willey of Hillsboro for four-year terms.

The ceremony marked perhaps the greatest turnover on the county board in almost a quarter century. Three new members also took office in 2011, but Chairman Andy Duyck already had been on the board 16 years, and Commissioner Bob Terry had been a public member of the county budget committee for 14 years.

Among those in a packed auditorium at the Charles D. Cameron Public Services Building in Hillsboro were Duyck, who chose not to seek re-election, and Tom Brian, a former Tigard mayor who was county board chairman from 1999 to 2011.

The holdover commissioners are Dick Schouten, who has been on the board 18 years, and Roy Rogers, 34 years. Their current terms end in 2020.

All three new commissioners touched on issues they raised during their campaigns: Traffic congestion and transportation needs, availability and affordability of housing, and job and business growth.

"We have some major challenges as the county continues to grow and diversify and have needs that we can only hope to partially address," said Rogers, now Oregon's longest-serving county commissioner.

While all pledged continuity with the past, they also acknowledged the county's growth and diversity. Washington County is Oregon's second most populous with almost 600,000 people — and a third of them are other than non-Hispanic whites, who still account for two-thirds of the total.

There are still no minority-group members on the county board, but there are now two women — and one is the first woman to lead the board in 20 years, since Bonnie Hays did so in 1987-95 and Linda Peters in 1995-99.

Treece has been executive director of the Westside Economic Alliance for six years and will continue in that role, subject to a review by the alliance board in six months. (County board positions are technically part time)

Treece was accompanied at the oath-taking by her 93-year-old mother, Paula Holzmann — a World War II veteran of the Royal Air Force — her daughter, Hillary Oda, and granddaughters Addison and Olivia Oda. She also has a grown son, whose family is on the East Coast. She is married to Marty Treece, who has owned his own real estate firm in Portland for 45 years.

"Across all areas, I will have a strong focus on equity, diversity and inclusion," Treece said. "We need to do everything we can at the personal level, the community level and policy work to make sure that all who call Washington County home are welcomed and included as we move Washington County forward together."

You can join us using

Paid for and authorized by Friends of Pam Treece.